Birthstones have different meanings and significance depending on the month of your birth. Garnet is the January birthstone, but the name for this precious stone is tied to other meanings. The Latin meaning for garnet references pomegranate, which is rational based on the typical appearance of this beautiful gem. Being born in the month of January elicits pride for many reasons and one important reason is tied to the connection with garnet. Understanding the history and symbolism of this precious January birthstone will give you a hint of its lore.

This particular gem can be traced all the way back to 3000 B.C. This stone was found around the neck of a young man in a grave from this century. The significance of this finding proves that garnet is a very durable stone. Garnet was always a stone that was used to signify wealth during all time periods in history. Plato was said to have engraved his portrait into garnet for posterity and bohemian castles even had interior decorations that were constructed entirely of garnet. The pure beauty of this stone is what made it so appealing for varying uses.

The popularity of garnet only grew during the 19th century and the January birthstone was a popular gem throughout the Victorian period. At certain times throughout history this stone was even termed carbuncle. The use of this word was derived from the deep red color of the stone that was similar to a blister. 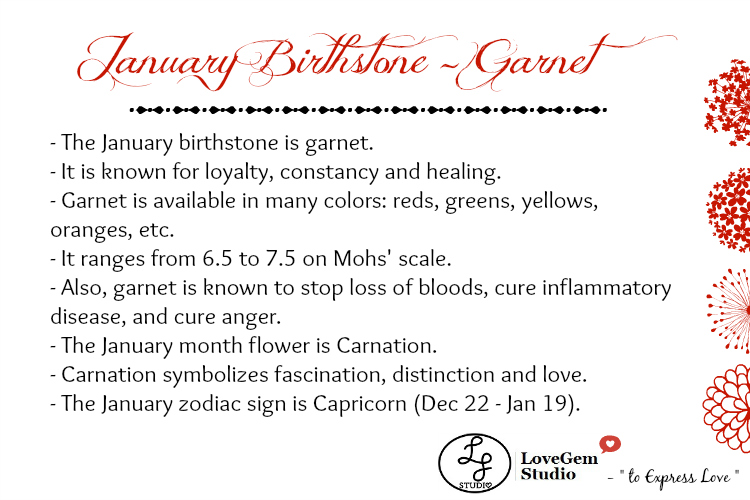 Garnet stands out due to its glorious luster and shine. However, it is also found to be the most occurring stone in the world. No other stone offers the range of color and shine that can be found in garnet. Some rare colored garnet gemstones have great worth and almost priceless value. There are many different traditions throughout history that are actually linked to this precious gemstone.

During medieval times, garnet was used for many different prior poses. It was believe that garnet even had special powers that offered cures. The January birthstone was thought to relieve depression and ward off nightmares. Even diseases were treated with the use of this stone. Liver diseases and hemorrhages were believed to be cured by garnet. These protections and cures that garnet offers gave this gem much significance throughout history. The popularity of this gem only continues to grow with time.